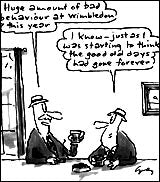 That estimable journalist Ann Leslie says she is in favour of the death penalty, but only for editors of teenage magazines who should be strung up from the nearest lamp-post. While agreeing in principle, I think that would be a waste of rope. They could be dispatched using their own tights.

Nevertheless, there is something to be said for a discriminating use of capital punishment. Applied judiciously, it could have a life-enhancing effect. My own candidate for topping is a man whose name I do not know, but whose title is director of marketing at the England and Wales Cricket Board (ECB). For it was he who first colluded with Channel 4 to mount a lunch time reggae concert on the first day of the Lord’s Test and, then, pronounced it a success.

It was indeed a success – if the purpose was to affront the bourgeoisie and to relish their evident discomfort when the experiment worked. I was seated in the Warner Stand at the opposite end of the ground when the band struck up and I can say, hand on heart, that the noise was indescribable. There was no escape from the thunderous repetitive bass beat, not even for those Middlesex county cricket club (MCC) members who scurried into the Pavilion and closed the rattling windows and doors behind them. Thus it was the New Britain confronted Old Britain across a patch of turf, so renowned wherever cricket is played that it long ago merited the adjective “hallowed”.

There must have been one or two old-timers cowering in the Long Room for whom the band’s assault brought back memories of the Somme. There were others who simply stared in disbelief as Caliban roared and raged and rattled his cage at the Nursery End. Never has the new barbarism bared its teeth to such terrifying effect, simply because it was happening at Lord’s, the very epitome of civilisation.

I am told – though can scarcely believe it – that the noise would have been louder still had it not been for angry calls to the ground from residents of St John’s Wood whose fillings fell out during the 8.30am rehearsal.

What was to unfold over the next three days was a game of cricket so thrilling and tense to the end that it left its onlookers pleasurably drained of all emotion, save wonder, as they made their way home on Saturday evening. Cricket had triumphed through self-advertisement. No thanks whatever were owed to the purveyors of gimcrack stunts nor to the tacky ministrations of the marketers who have come to infest the game like weevils in a jaffa cake.

I have said it before and I’ll say it again – marketing and sport do not mix. And when they are forced together, sport loses out. It is, for instance, at once comical and unsettling, to see cricket umpires whose authority, as with all authority, requires dignity, wearing jackets bearing the legend “The Happy Shopper”.

Before it is led even further down the path to perdition, cricket should look over its shoulder at tennis, whose adherents have become so inured to tawdriness that they relish each new tantrum and, should none materialise, complain that the game no longer has “characters”, a euphemism for misfits and boors. Fortunately for those who know nothing about sport, and probably not much about tennis either, yet flock to Wimbledon all the same, the events of the first week must have been satisfying.

The ball boys were instructed not to look up the skirt of the deliciously pulchritudinous Anna Kournikova, though anything they might have seen there would have been infinitely more elevating than the sight of Jeff Tarango accusing his opponent of cheating; Anna Smashnova firing a ball into the crowd and hitting a woman spectator; Wayne Ferreira letting loose a foul-mouthed verbal assault on the umpire; Alexandra Stevenson accusing other players of racism; and the father of Jelena Dokic being led away by police after drunkenly declaring that the Women’s Tennis Association was run by criminals and fascists. And they call that sport?

Well, yes they do. As the Daily Mail’s sports writer “Mike” Dickson explained after the riff-raff had snarled their way through another day: “Modern sport is a commercial battlefield for the attention of fans – and therefore the sponsor’s dollar – and there is no doubt that days like yesterday’s (sic) provide the human drama that is the purest source of ratings.” Pure is not a term I would have used in that context, nor is the word “perhaps” in Dickson’s tentative suggestion, “It (tennis officialdom’s greater tolerance of bad behaviour) is perhaps a sign of the coarsening of the age we live in”.

Cricket – an intelligent, unhurried game of changing moods, tempos and nuances, best enjoyed with the help of a little knowledge – has entered into a mephistophelean pact with Channel 4 the effect of which may be to drive away true lovers of the game. Lord’s may yet come to regret its decision to throw itself wholeheartedly into the commercial battlefield, especially if the term “cricket hooligan” enters the vocabulary. Of one thing you may be sure, when the ECB’s director of marketing, whatever his name is, mounts the scaffold, his last words will be, “Cricket is merely a reflection of society”.