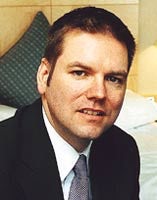 Moat House Hotels has appointed Stuart Leven as its sales and marketing director and added a new agency to its roster.

Leven replaces long-serving sales and marketing director Mike Jones, who left in April. Leven has been involved in an agency review for the Queen’s Moat House-owned chain and has added Conrad Advertising to its roster, which already includes Atticus Advertising & Marketing. The company spent &£110,000 on advertising in the year to March 31 (AC Nielsen MMS).

Leven was previously sales and marketing director at online travel specialist Travelselect.com. Prior to this, he spent ten years at KLM Royal Dutch Airlines, latterly as head of international sales and supplier relations.

Leven says that, along with the rest of the hotel sector, Moat House needs to rebuild demand from midweek business travellers. In May, Queen’s Moat House reported a plunge in pre-tax profits, from &£25.3m in 2000 to &£4.3m in 2001.

Rival chain Holiday Inn is launching a national summer promotion, offering one free weekend night to every guest who stays three times in midweek between July and September. The offer is being promoted with a national press and radio campaign created by Leo Burnett, with media planning and buying by PHD.

The Department of Transport (DoT) has awarded its high-profile £2m drink-driving account to D’Arcy. The agency lost the business to Abbott Mead Vickers.BBDO (AMV) in 1998. D’Arcy pitched against WCRS, BMP DDB and the incumbent (MW May 30). The decision to appoint D’Arcy does not affect AMV’s work on the DoT’s other advertising, including the […]