Western Europe is behind in mobile ad spend compared to other global regions owing to concerns about privacy, consumer engagement and a lack of standardised metrics, finds new research.

Statistics show that mobile advertising spend in Western Europe is around half that of North America and APAC at $12.1bn, compared to $29.9bn and $23.7bn respectively. Spend in LatAm is $1.4bn. The study identifies possible reasons for why marketers in this region may not be spending as much as others in mobile. In Western Europe, consumers’ concerns about privacy are the top issue, mentioned by 22% of those surveyed, ahead of people ignoring mobile ads (19%) and a lack of standardised metrics (11%).

Sarah Ohle, senior director of global research at xAd, says: “For the same reason that mobile has so much opportunity – because it’s a personal device – there is always going to be a privacy piece [to consider]. People are protective of their personal device.”

The top three concerns for marketers and agencies in North America match those in Europe, with almost a quarter in the US and Canada (24%) finding privacy a challenge, compared with 20% that cite consumers ignoring mobile ads and 14% mentioning metrics.

Ohle believes these concerns will change as more people understand that marketers are not trying to track and reach an identifiable person. She says: “If privacy checks are in place, people will be willing to give up a small amount of information for something valuable to them in exchange.”

Consumers ignoring ads is the top concern for LatAm at 21% and the second biggest for APAC at 18%, while privacy stands at 17% and 19%, respectively. The third biggest concern for LatAm is lack of agency expertise (16%), but for APAC it is a lack of mass-market reach for mobile advertising (14%). 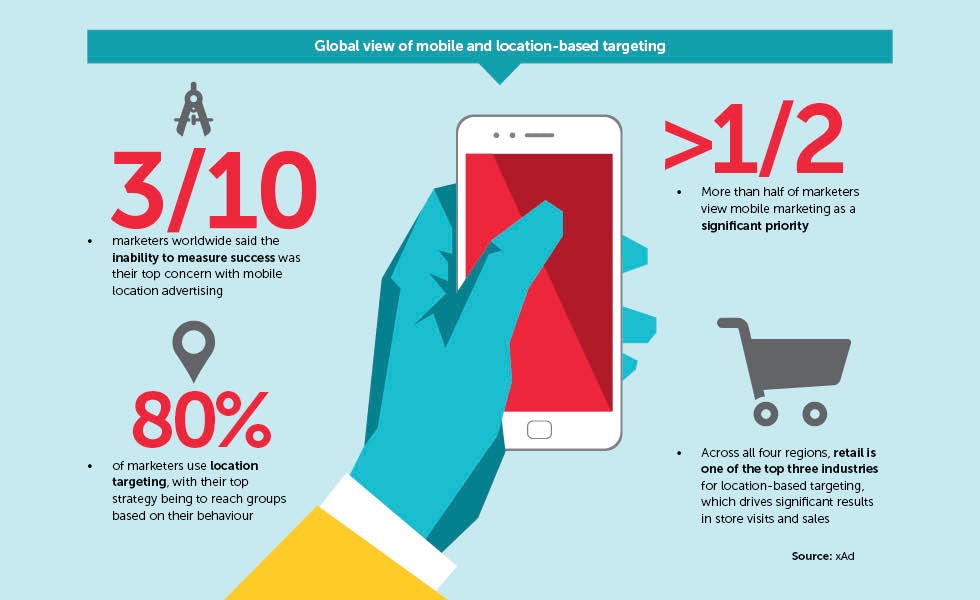 APAC and LatAm are, however, the regions expecting to see most growth in spending. In APAC, 22% believe that it will increase by more than half in the next year and 31% by less
than half. For LatAm, the figures are 18% and 38% respectively.

In North America and Western Europe, a minority of the marketers and agencies surveyed confidently predict growth in their region’s mobile advertising market. The statistics for North America show that 13% of respondents believe mobile and location-based ad spend will increase by more than half in the next year and 30% say it will increase by less than half; in Western Europe it is 11% and 29%.

These two regions are the most mature markets for smartphones, according to research by eMarketer conducted in March this year.

Despite the disparities in spending and growth predictions between global regions, the xAd study is optimistic as two-thirds of marketers and agencies worldwide believe consumers are either engaged with mobile ads (32%) or could be receptive to them in the future (33%).

In addition to general mobile advertising spend, xAd’s report looks at the major trends that are affecting the use of location-based advertising specifically. It shows that among the 78% of marketers using location in their mobile ad campaigns, the top strategy is audience targeting based on reaching consumers in the moment by looking at behaviours and interests. Almost half (46%) of marketers aim to target a specific audience with their ads, 37% target people located around businesses and points of interest and 31% use location to send mobile messages.

The positive news is the marketing opportunity in Western Europe offered by high smartphone penetration and developments in device technology. Ohle says this enables advertising to go beyond a static banner, and for marketers to interact with consumers in a tailored way. “What we have seen across the board is that location-based creative that shows how close a customer is to a retailer increases engagement and reactions,” she explains.