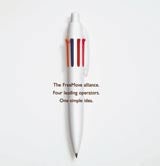 The FreeMove Alliance – the telecoms equivalent of the airline industry’s Star Alliance marketing partnership – has launched a website aimed at its 170 million potential consumer and business users across Europe.

FreeMove was set up last year by T-Mobile, Orange, Telefonica Moviles and Telecom Italia Mobile in an attempt to rival Vodafone. It offers subscribers a range of standardised mobile services at a single tariff, including improved international roaming.

The website was designed by digital agency E3, which won the business after a nine-way pitch. E3 has been Orange’s retained digital agency for the past four years.

E3 joint managing director Stuart Avery says: “The first stage of the site is designed to reflect the FreeMove brand online and to provide data capture facilities. The second stage will promote products and services and have a full e-customer relationship management system.”

The site is available in five languages, with non-English content produced locally rather than being “farmed out to a translation agency”.

In September, Young &amp; Rubicam Europe beat off Saatchi &amp; Saatchi and Mother to win the pan-European advertising account for the alliance, said at the time to be worth an estimated &£30m annually. The website’s launch coincides with a &£5m above-the-line campaign, including posters at major European airports and press ads in leading European business titles.