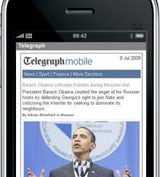 The annual census, which surveys publishers and brands including News International, Bauer Media and Reuters, revealed three-quarters are planning to boost their skills in the burgeoning sector.

The Telegraph said it plans to invest in a number of new vertical markets in mobile which will include both paid-for and sponsorship models.

Maani Safa, head of mobile at Telegraph Media Group, said, “We’ll build apps around key events such as Formula 1 and the FIFA World Cup.” He added that The Telegraph is considering charging for such apps. “We’ve had some success with free content, building an audience and then a sponsorship model around that, but I’m eager to try paid-for models.”

Condé Nast Digital Britain plans to launch a series of iPhone apps, including a paid-for app for Condé Nast Traveller charging users to access city guides, and a free app for its men’s title GQ.

Jamie Jouning, publisher at Condé Nast Digital Britain, said that because mobile content is still in its infancy, publishers need to grasp how to create revenues from the medium. “I’m not sure everyone knows best how to monetise mobile,” he said. “We have to make sure we get it right. We’re investing but there are lots of different models available.”

Other publishers expect to ramp up their mobile presence dramatically this year to take advantage of the growing number of mobile users.

However, he warned the publishing industry shouldn’t just focus on apps. “I don’t think it’s a sustainable business model on its own,” he said, adding that mobile ad opportunities are still limited.

The Independent said it expects to increase its current mobile audience and create new ones.

Bill Swanson, MD of digital at Independent News & Media, said the publisher plans to create a new mobile role looking at delivering editorial content across mobile as “we need to invest in this area”.

The survey also found that more than half of media owners (51%) see mobile development as the biggest challenge to their growth this year.
The census revealed 75% of media owners plan to increase investment in their digital business, with 47% planning to bolster their investment in staff training.

Examining four key areas – brands and business functions, staffing and skills, revenues and investments, and future challenges – the survey showed over half of publishers (57%) plan to increase their staff numbers this year, up from 34% last year.

Ad sales was cited as the biggest priority for investment in skills by 45% of media owners, followed by editorial (33%) and database and data analysis (25%).

Mary Beth Christie, head of product management at FT.com, said, “Ad sales continues to be a priority for us. I don’t think advertising should take a back seat.”

In its eighth year, the AOP online questionnaire was undertaken from 15 January to 8 February 2010.

Tim Cain, head of research and insight at the AOP, said the census findings were encouraging. “There’s definitely more optimism and more confidence as we edge out of the recession,” he said.