Doro is attempting to reach the 64 per cent of seniors not using a smartphone with a two-month TV campaign featuring the Doro Liberto 820, a device the brand are calling “the understanding smartphone”.

Chris Millington, managing director of Doro UK & Ireland, says its own research revealed that 53 per cent of seniors in the UK, France, Germany and Sweden want a smartphone. Millington says this is largely due to “pester power” where children or grandchildren are telling seniors they should invest.

“Research also shows that people feel like they are intruding on younger relatives lives by asking for help all the time,” Millington says. “We’re assisting and motivating people to do more but at their own pace.”

The Liberto 820 features a built-in coach to help with navigation, HD voice for hearing assistance, hearing aid compatibility, large icons, shortcuts for important features and contacts as well as the “My Doro Manager” app which enables friends or helpers to assist the user with setting up things like WiFi. The device will sell for around £200 SIM free.

Similar products exist on the market, such as the GreatCall Touch3 by Samsung in the US, but Millington says that many brands remove more complex features when targeting the 65+ group. Instead, he claims the key is to make features more logical to use and to provide more support and tutorials.

Though older consumers have largely been ignored by the technology industry, their disposable income, family ties and growing engagement with technology make them a valuable group to target.

Thomas Husson, VP and principal analyst of marketing and strategy for Forrester, believes that although they may be less mobile-saavy than younger generations, the 65+ age group are increasingly using smartphones and tablets and their behaviours are evolving quickly.

“This will open up plenty of new opportunities to serve this age group, not just in mobile health, but in all services that are relevant to this particular audience,” he says.

“Brands are just starting to wake up to this opportunity, realising that smartphone usage is not only restricted to the younger generation.”

The insights team at Microsoft Lumia say the company are trying to learn more about this audience, with plans to engage 55-70 year olds in focus groups and during store visits over the next two weeks to find out what can be done to break down smartphone barriers.

Campaign ties in with launch in major retailers

A 30 second advert promotes the 820 while a 20 second spot will focus on the PhoneEasy range of easy-to-use mobile phones. Online display is also being used on websites with high traffic among the 65+ audience.

“We’ve changed the emphasis to a cheekier tone of voice and a different look and feel,” Millington says.

The campaign will run from 10 Nov to 24 Dec to coincide with the phone’s launch into major retailers such as Carphone Warehouse, O2, EE and Vodafone by 1 December.

Millington says that Doro have been researching the senior market since 2007.

“We wanted to take the next step forward in smartphone development for this generation.” 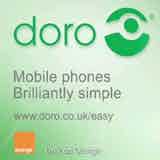 Doro UK has unveiled its first TV advertising campaign to support sales of its growing portfolio of easy-to-use mobile phones.

EasyGroup has launched a £5m marketing campaign to back the launch of the latest extension of the recognisable orange brand, digital estate agent easyProperty.com.