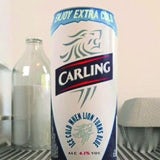 The news comes as the brewer nears the end of a portfolio-wide review to explore how its beer brands could appeal to women.

The company will introduce the drinks in the on and off-trade “by the middle” of 2010, according to Molson Coors chief executive Mark Hunter.

Introduction of the range, details of which will be revealed next year, follows 18 months of research carried out by the brewer’s Bitter Sweet business unit, setup to explore what women want from beer. The aim, Hunter says, is to develop a market all but ignored, with 60% of woman admitting to not drinking beer.

The brewer already has Kasteel Cru and Kasteel Cru Rosé, “female friendly” beer-like drinks made from Champagne yeast. The new range, Hunter says, will be a “new concept and new idea.”

Discussions with on and off-trade partners about improving the “experience” of buying beer for woman are ongoing, he adds, with possible initiatives set to include in-store marketing aimed at “engaging” with prospective female drinkers.

Black glassware developed by fashion designer Amy Molyneaux, also aimed “at getting the beer experience right” for women, has been introduced.

The company is also reviewing the positioning of a number of its beer brands, including a “more unisex positioning” for flagship drink Carling, in a bid to broaden their appeal.

“You will notice changes in our marketing,” Hunter says.

Separately, Hunter unveiled that the company will relaunch low-alcohol lager C2, first introduced in 2004, next year.

“We had a product that is a good liquid, tested well but the positioning was not as right as it needs to be.”

The company has called on Government to provide the low and no alcohol category with a “short-term stimulus” by reducing tax, Hunter adds.

“It would help grow a category that promotes responsible drinking,” he says.