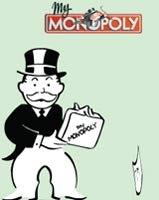 Hasbro-owned board game Monopoly is claiming this week to be the first brand to use next-generation mobile phone technology for marketing.

Unlike SMS, the newer technology allows the sending of colour images, moving pictures and sound.

MMS has been delayed because it needs the higher bandwidth provided by 3G, a technology that has yet to make its mark.

But Hasbro and MindMatics were keen to see if less ambitious MMS messages could still work using 2.5G.

The Hasbro campaign supports a customised version of Monopoly, which is being promoted via the website MyMonopoly.com.