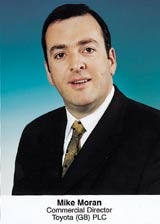 Moran becomes commercial director, a new post in which he will take responsibility for both the sales and marketing divisions. He will be responsible for appointing a replacement for Goss. The position is expected to be filled internally.

Philpott, former general manager for vehicle marketing, takes over Moran’s previous role as marketing director. He takes on responsibility for all marketing and sales communications for new and used cars.

Moran poached Philpott in 1997 from Ford, where both Moran and the managing director of Toyota Graham Smith previously worked.

Moran says: “This is another step towards being a brand-led company, particularly when you remember that our current managing director was previously the marketing director. The company’s key officers come out of the marketing stable.”

Toyota’s three biggest selling cars are the Yaris, the Avensis and the Corolla. It is preparing for the launch of a new version of its Selica sports car model at the end of the year, and has five more products ready for launch next year.

Stuart McCullough, general manager of Lexus (GB), which is responsible for marketing Toyota’s luxury marque the Lexus, has been promoted to the new position of director. He will be responsible for the sales and marketing of Lexus cars in the UK.