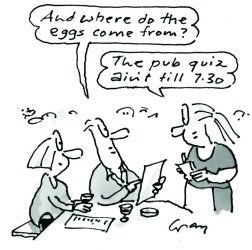 On the face of it, one of life’s great mysteries is why politicians, the least equipped to offer advice to anyone, feel most compelled to do so. The answer is self-delusion.

MPs are by nature self-important and bossy. Why else should they have the babyish ambition to stand for Parliament? Despite being drawn in the main from the lowly orders of social workers and failed lawyers, or perhaps because of it, they feel somehow chosen to stand above their fellow humans. Whenever I hear a politician say that he or she went into public life “to make a difference” I pull the sheets over my head and pray for deliverance.

All the more reason then for savouring those moments when the menace is revealed as a thing of paper and straw, and a laughable one at that. Who among those alive at the time of the three-day week energy crisis of 1974 can forget the advice of the then energy minister Patrick Jenkin that we should brush our teeth in the dark? Fast-forward a decade and Edwina Currie, a woman in whose breast a lack of self-awareness vies with a gigantic urge to bossiness, is urging poor people and pensioners to make nourishing soup from root vegetables.

In the present day we have that son of fun Ben Bradshaw, junior minister for sundries, who tells us to leave “overpackaged” goods at the supermarket checkout, this being his preferred means to combat waste.

Silliness is not confined to junior ministers. Gordon Brown, soon to complete his ascent of the greasy pole, recently advised us to save the planet by switching off our televisions at night.

Sometimes the advice comes as a double act, as happened last week when Tony Blair and environment secretary David Milliband urged diners in restaurants or pubs to enquire politely as to where their food comes from. The purpose of this peculiar request is, apparently, to encourage the sale of British food.

It takes no account, however, of the practical difficulty encountered by people buying goods or services in Britain today, which is that those entrusted with delivery at the point of sale are almost entirely ignorant.

There is the true story of the lady shopper who asked a young boy assistant in Tesco if they sold cloves. “Yes,” he replied, “but only T-shirts.”

Does the Prime Minister truly believe that the pasty young woman who shuffles over to your table in the pub and plonks down a plate of hamburger and chips knows where either the meat or the potatoes originally came from? Will the manager be able to enlighten you? Of course not.

Ask for the origin of the beef and you will, at best, be met with an uncomprehending stare and, at worst, with a facetious comment such as “from the kitchen” or “from a cow”.

Anyone tempted to follow Blair’s advice should recall the timeless response to a drinker who complains that the beer is cloudy. “What do you expect for £2.10 – thunder and lightning?”Occasionally the sportive customer bites back, as in the following legendary exchange: “Waiter, do you have frogs’ legs?””Yes, sir.”

“Well hop off and get me a cheese sandwich.”

In truth, however, the relationship is wholly one-sided, with the waiting staff having the upper hand.

But let us assume, for the sake of argument, that the waitress is knowledgeable. You ask where the poulet en croute comes from and she replies, “From a smallholding nestling at the foot of the Pyrenees where the fowls are free to roam on grassy slopes beneath skies of an azure blue and under the watchful gaze of M Trouchard, a farmer and colourful character whose eye for the ladies is as legendary as his feel for a hen. Or vice versa.”

What are you supposed to do then? Refuse the meat on the ground that it is not British? Make a formal complaint? Report the matter to David Milliband? Or order a guilt-free tuna salad?But to be fair to Mr Blair – something that does not come easily – the reason for his curiously circuitous advice is that European competition law forbids ministers from actually telling people to buy British.

An obvious way to help our farmers would be to award them contracts in the public sector, which spends almost £2bn a year on food. However, this cannot be done because European law now requires us to have open procurement contracts.

So, hamstrung by this law and victim of the wretched common agricultural policy, the British farmer must fall back on diners at the Dog and Fiddle asking where the steak and kidney pudding came from and getting predictable answers in response.

A solution which is as much use as advising rural England to milk its cows in the dark.

The Diary always thought that rival media agencies got on about as well as Shilpa, Danielle and Jade in the Big Brother house – but it seems that unlike those bitchy “celebs”, media types do actually harbour genuine concerns for each other. Take the example of heavyweights MediaCom and JC Decaux. Media company MediaCom recently […]

The Direct Marketing Association (DMA) has appointed Rosemary Smith as chairman to succeed Charles Ping, who has stepped down following the completion of his two-year term. Smith, who is managing director of RSA Direct, has been deputy chairman for the last two years. David Metcalfe, head of wholesale banking development at Lloyds TSB Scotland and […]

The Walt Disney Company has appointed former iTunes head of content Martin Morales as executive director for its Buena Vista Music Group across Europe, Middle East and Africa. He joined the company this month. Morales will be responsible for operations across the group including marketing and promotional activities, driving sales, managing relationships with licensees and […]