Half way through January, many people will already be wavering in their resolve to get fit and be more frugal with their money in the new year. Chances are that Londoners will break those resolutions before the rest of England, as new research indicates they eat out more often than inhabitants of any other region, spending over 50% more – and the gap is growing.

However, as London’s casual dining market becomes saturated and record numbers of 30-somethings leave the capital, prospects for faster growth could lie elsewhere in the South East and in northern cities.

Londoners eat out seven times per month, spending £105 on average, according to the survey conducted by strategy consultancy Pragma, a St Ives Group company. That compares to six times a month at just £69 on average in the rest of England.

Londoners’ higher spending is accounted for by greater consumption, not just higher prices, and that continues to increase.

The proportion of Londoners who are eating out at casual dining restaurants more than they were a year ago exceeds those eating out less by a net difference of 27 percentage points, and by 13 points for fine dining. The rest of the country is eating at casual restaurants more too, but only by a net 18 points, while they are visiting fine dining establishments slightly less, by 2 points.

Pragma director Helene Mills says: “Simply put, London has a larger appetite. Our research finds that 37% of London diners ‘absolutely love’ dining out, compared to 32% outside of London, and they are doing so more frequently. Furthermore, the gap is widening.”

Londoners are also markedly more adventurous and trend-led than others in England, with one in 20 having eaten a ‘cronut’ – a croissant-doughnut hybrid – compared to one in 50 elsewhere.

London is the only one of four English cities surveyed where modern food is valued more highly than traditional, and diners in the capital are the least likely in the country to describe themselves as ‘safe’ eaters. 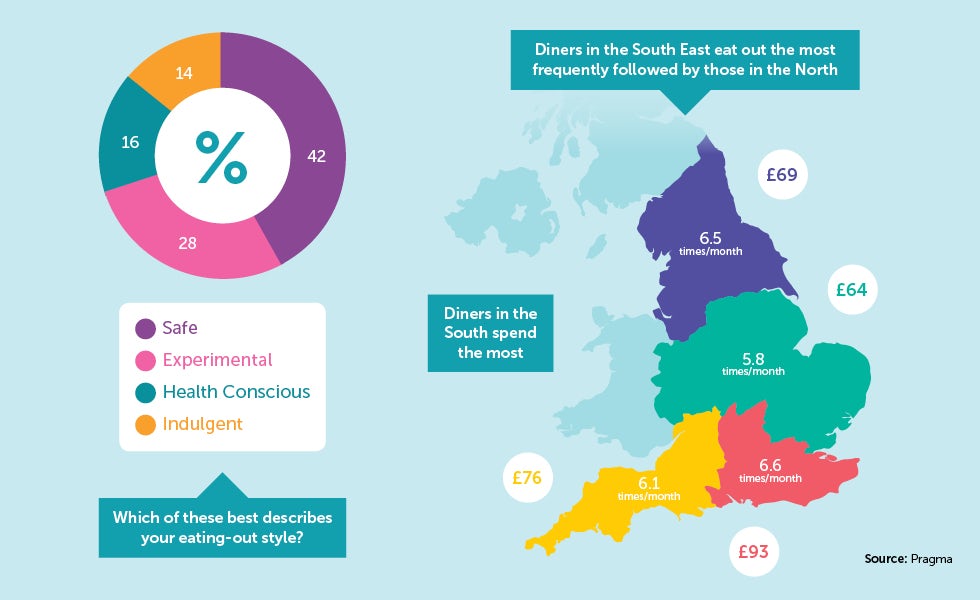 Manchester shows the next highest appreciation of modern food, ahead of cities in the Midlands and South West, which goes some way to indicating the level of opportunity for new restaurants in northern cities. Northerners also eat out more often than these other two regions, enjoying the often cheaper prices for meals.

Mills says: “While London is a powerhouse, there are significant opportunities elsewhere, with the South East and large northern cities such as Manchester seemingly most ripe for opportunity. The gap in monthly dining out frequency between the South East and the North is small: 6.6 times per month in the South East, compared to 6.5 in the North. Around 82% of London diners eat out once a week or more, and the equivalent figure for Manchester is 77%.”

Judging by the example of New York, London’s increasingly saturated restaurant market still has some headroom to grow consumption, she adds, but elsewhere in the South East and in the North, there is a bigger gap between demand and supply for brands to fill.

In mass market terms, established chain brands retain the biggest potential market in England overall, since ‘safe’ eaters are the biggest segment of the four identified nationally, accounting for 42% of the population. However, this group eats out less often and spends less than all the other segments, which are defined as ‘experimental’ (28% of England), ‘health conscious’ (16%) and ‘indulgent’ (14%).

Mills claims the greatest opportunity lies in “fast-casual restaurants with wide appeal – British, Italian, Indian and Chinese are reported to be the most popular cuisine types amongst diners in England. Simple, meat-centred trends such as gourmet burgers and American barbeque also have wide appeal and have been proven to thrive coast to coast”.

However, she adds that brands ought to be aware that “while experimental touches can be beneficial for marketing buzz, reliable quality and consistent execution are paramount for long-term growth”.

Mills also points out a gap in the market for less-developed formats such as travel hubs, airports and petrol stations “We have seen a lot of movement in recent months, such as Patisserie Valerie opening in service stations and forecourts and Comptoir Libanais opening in Gatwick and Heathrow Airports”.

Tesco CEO Dave Lewis says the supermarket must focus on rebuilding trust and transparency in the Tesco brand as he looks to kickstart the supermarket’s turnaround by proving he is listening to customers with a round of price cuts but says unprofitable stores will shut and there will be job losses, possibly in marketing, despite an improvement in sales over Christmas.