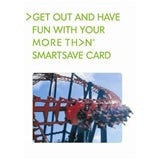 MoreThan, the Royal &amp; Sun Alliance-owned direct insurance brand, is piloting a loyalty scheme for policyholders in the hope of retaining customers in a price-led marketplace (MW last week).

The Smartsave scheme gives policyholders up to 20% off at a range of online shops, UK attractions and on worldwide travel. It is being offered to customers whose motor and home renewals are due this month.

It is the first tangible benefit offered to customers since the brand announced its intention to offer “value” over policy price last year (MW December 8).

But industry commentators and rivals suggest that price will remain key to acquiring customers for the foreseeable future. They are quick to suggest that the loyalty card is a gimmick – destined to fail if MoreThan’s products and prices are not right.

Peter Gerrard, a senior researcher at price comparison site moneysupermarket.com, says: “It sounds very gimmicky. It is still very much a price-driven marketplace and that looks set to continue. If anything it is going to get more aggressive because people are more savvy.”

There is also a growing trend to offer more bespoke or bargain services, with the introduction of Norwich Union’s “no night driving” policy for young drivers in return for bumper savings and Tesco Personal Finance’s “Value” range, which offers a stripped-down fully comprehensive policy for 12% less than its standard policy.

Gerrard believes aggressive tactics such as price-cutting show that the insurance business has been creaming off profits for years.

“There is not much loyalty in the marketplace,” he adds. “With motor and home insurance there is little profit in the first year because of incentives and introductory discounts.”

He said insurers better renewal quotes to gain business, but in the second year they rely on inertia.

An insider at a rival insurer points out: “Eventually we will get to saturation point so companies are having to think now about what to do if and when that occurs. There will be winners and losers.”

However, for the moment, the rival thinks that price remains the key driver, followed by service in the event of a claim: “You only find out how good insurance is as a product when you have to claim. That is when loyalty is guaranteed – not through discount schemes and fancy extras that nobody needs.”

MoreThan head of customer management Chris Pratt agrees but says the scheme is more a reward than a hidden extra and that product and service remain king.

“We are keen to demonstrate that there is more to our proposition than just price,” he adds. “The loyalty scheme is very much part of the strategy ‘We do more’.

“Insurance companies are obsessed with price. That’s how the traditional players look to build market share. It takes a brave player to break the mould.”

Nonetheless, the insurer will still concentrate on making the “top five” best buys wherever possible. The pilot card scheme will be assessed later this year, and could be rolled out further.

Few seem in doubt that eventually loss-making, price-led acquisition strategies will wane, although there is a feeling that MoreThan has changed tack too early. It remains to be seen who will be “brave” enough to follow its lead.