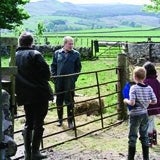 The ad campaign breaks tomorrow (6 November) during The X Factor on ITV.

The campaign continues Morrisons’ advertising strategy that features a group of “inquisitive” children asking questions about how Morrisons sources and prepares its fresh produce.

Morrisons’ Christmas campaign uses the strapline: “More Christmas for less”, which will run across all its festive marketing activity.

The TV campaign includes three executions focussing on children’s Christmas favourites. The first shows the “journey of Morrisons’ sprouts” from the farm to the store.

Morrisons has also themed its stores for the festive season turning its Market Street fresh produce department into the “Morrisons Christmas Market”.

The supermarket is pushing its premium range Morrisons Best with an “aggressive promotional package to drive footfall, encourage new shoppers and reward existing customers” with a  25% off promotion and an extensive sampling campaign.

It is also introducing a Taste Guarantee, which offers customers money back if they aren’t happy with the taste of the Morrisons Best range.

Bates says the guarantee “endorses Morrisons’ belief in the quality of the Best range”.

The supermarket is also extending its Christmas Collector scheme into the New Year to help ease the pressure of the VAT increase.