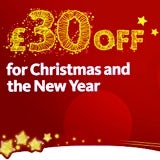 Morrisons has operated the collector scheme for the last few festive seasons to drive loyalty and it says, help shoppers cover the costs of Christmas grocery shopping.

Shoppers are rewarded with £30 Morrisons vouchers if they spend over £40 each week in Morrisons between 8 November and 19 December.

This year part of the reward voucher can be redeemed until 30 January, while in previous years the voucher has expired on 31st December.

Richard Pennycook, Morrisons group finance director, says the extension aims to “help with the effects of the VAT increase”.

He adds that Morrisons is expecting strong performance during the Christmas period but warns that the festive season is “an exception to the rule” and the rest of the year will remain a tough trading environment.

Earlier today, Morrisons reported a “solid performance” in the three months to 31 October and reiterated its commitment to the strategic initiatives outlined by CEO Dalton Philips in September.

Morrisons is the latest brand to launch a VAT driven initiative to help reduce the impact of the impending rise in VAT for shoppers.

Observers predict that more retailers will offer VAT deals in January when the rate increases from 7.5% to 20%.

Sony has launched a VAT-back scheme that allows shoppers to claim back the VAT on Sony purchases before 24 December.