Metcalfe will have oversight of the supermarket’s burgeoning digital marketing strategy as it prepares to launch its online grocery service next year. She will report to group marketing and customer director Nick Collard.

The supermarket will market its ecommerce service around fresh food and customer service, which typically generates more sales than any other groceries, in an effort to stand apart from the more established ecommerce offerings of its rivals.

Morrisons will be hoping Metcalfe’s etail experience at eBay and Sainsbury’s can amplify its late entry into the online grocery market as it looks to arrest ongoing sales declines. It believes it can increase its accessible market by around 40 per cent by building a long-term presence in convenience and online channels.

During her time at eBay, Metcalfe is said to have developed a marketing strategy to target female consumers online during her 12-month stint as its first UK and Ireland marketing director. She also served as interim head of online marketing boss at Sainsbury’s and has held roles at Cocosa.com, Selfridges, Debenhams and Laura Ashley.

Morrisons was unable to provide comment on the move by the time this article was published. 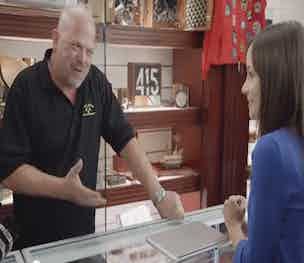 Microsoft is continuing its anti-Google ‘Scroogled’ campaign, this time taking aim at its Chromebook with the help of reality TV star Rick Harrison from the hit show ‘Pawn Stars’, who derides the device as “not a real laptop”.