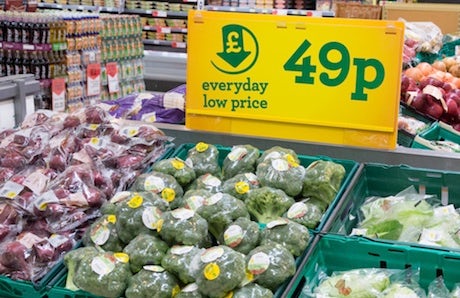 Sales at stores open for more than a year slumped by 7.4 per cent in the half year to 3 August, worse than the 7.1 per cent decline in the previous quarter. Total sales were down 4.9 per cent year on year to £8.5bn while its profit halved to £181m.

Despite this, Morrisons chief executive Dalton Phillips, speaking on a press call this morning (11 September), insisted the business is “getting back on the front foot” with a focus on price, value, convenience and fresh food. He claimed that across the 12,000 lines included in its “I’m Cheaper” marketing campaign volume sales are up by 30 per cent since May and that the supermarket has seen a “reversing rate of decline” in basket size.

Morrisons has also reduced its range by 2,000 and cut back on promotions in a bid to simplify the shopping experience for customers.

“We have cut prices with a big bang with our biggest ever marketing campaign. We have made Morrisons an easier place to shop by reducing range and focusing on fewer and better promotions. This is only a start but we are sure the signs of change are beginning to resonate with customers and change shopping behaviour,” he said.

Speaking to Marketing Week, he said the aim of the reduced prices and better promotions was to “get back” consumer trust, with the recent shift to an “every day low prices” message meant to hammer home the fact that the price drops are permanent. He claimed that in the whole of the second quarter, Morrisons has only raised the price of 300 products across its entire range while its peers have increased the price of 2,000 items.

“Consumers have a lack of trust with the supermarkets, with lower prices we are going to put that back. We haven’t raised a single price for products in the ‘I’m Cheaper’ campaign that is a big plank for us. Changing perception takes time but we are encouraged by the early results,” he said.

Morrisons also said its loyalty scheme will launch before Christmas following successful trials. While Philips did not go into further detail on what the proposition might look like, he said that the programme would provide Morrisons with a better way to communicate with customers and back up its value credentials.

“The loyalty market is evolving, people want to have a relationship with retailers. We have 12 million customers and we don’t know who any of them are. This is not viable,” he added.

Morrisons’ online business is on course for a run rate of approximately £200m this year, with Philips “encouraged” by the first few months of business. He claims its on-time delivery rate of 97 per cent is industry leading and says the plan is to expand the range to 17,000 SKUs, as well as continuing to roll out the service across the country.

Nevertheless, these results show conditions in the market remain difficult as the big four supermarkets face a growing challenge from the discounters. Philips highlights that the supermarket is just 2 quarters into a three-year turnaround plan and that although there are “encouraging initial trends” there is unlikely to be any significant sales improvement before the end of the year.