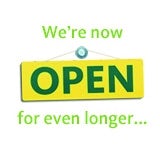 CEO Dalton Philips has previously outlined plans to boost performance by bringing the supermarket more in line with the services its rivals offer including convenience stores and online shopping.

The supermarket has launched a press campaign to promote the longer trading hours and its commitment to “making life easier”.

The ad states that Morrisons is extending its opening hours because the supermarket has listened to its customers and understands how busy they are.

Mark Harrison, Morrisons group retail director, says the change to longer and more consistent opening hours comes in response to shopper research conducted over the past two years and means that shoppers can “access the products and services they need, when they need them”.