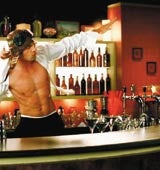 Mother has created a television campaign for Diageo-owned ready-to-drink brand Archers Aqua, with the tagline ‘Something for the ladies’. The agency was appointed to the advertising account in August. The ads, which will be rolled out this week, feature male pilots and firefighters. This is the first TV work for the brand in almost a year. In the past it has used the strapline ‘Come out to play’, which was created by Saatchi &amp; Saatchi. The ads form part of a £4m campaign that Diageo has planned for Archers Aqua and Archers Schnapps between October and Christmas. The agency will create a cinema ad for Archers Schnapps, which will break on November 13. Archers is aimed primarily at women. Media is handled by Carat.