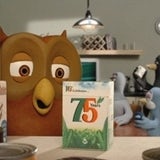 Mother has snatched the &£10m PG Tips business from DDB London. The news will come as a blow to DDB, which has held the account since 1922.

The tea brand is the second piece of significant Unilever business that Mother has won this year. It picked up the &£10m business for snack brand Pot Noodle earlier this year (MW January 19).

Unilever invited Mother to pitch against DDB for PG Tips in March. It is understood that Mother will develop a branding campaign that will follow a World Cup promotion. This has already been created by DDB.

DDB, via Boase Massimi Pollitt (BMP) and Davidson Pearce, was the agency that developed the brand’s iconic PG Tips chimps advertising, which ran for 45 years until 2002. The chimps were replaced by the T-Birds, a group of plasticine birds that share a flat and drink tea.

It is understood that Unilever’s decision to look outside its traditional roster is part of a change in strategy at the company. It is keen to move away from traditional television advertising to use a broader and more diverse range of media. DDB will still handle the Marmite and Lipton Ice Tea brands for Unilever Foods UK.