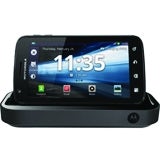 The mobile manufacturer will continue its £10m marketing drive around its “hero” products, the Xoom tablet and Atrix smartphone, until the end of the year when a new tablet product is likely to be released.

Motorola is currently at 16th place in the mobile phone brand “buzz” rankings, with a score of 0.15. It has dropped four points since March when hype was building around the UK launch of Xoom, according to YouGov’s Brand Index, which measures brand reputation and perception.

UK marketing director Victoria McManus says: “We have been engineering technological solutions for the 80 years we have been in business, but sometimes we were engineering things just because we could. What has changed is that we’ve partnered that ability to engineer with deep consumer insight.”

She adds the “life empowered” positioning, which aims to empower consumers to achieve their potential through technology, sums up what the brand now stands for and what it hopes it will become associated with in the future.

The company aims to boost its appeal with a younger audience and create more buzz around the brand with a raft of digital activity including proximity targeting to drive consumers to Orange stores, an experiential drive for Atrix at London underground stations and an optimised mobile site.

McManus says: “For young consumers who are massively spurring the smartphone market, we don’t stand for anything yet, we’re only just starting our journey in the UK.”

Motorola commands a 3.5% share of the UK mobile handset market, according to comScore, but McManus says the company measures itself instead on sustainability and profitability.

The company split into two separate business in January: Motorola Mobility, which incorporates home and mobile and Motorola Solutions, which handles business products such as two-way radios.

For the three months to March, Motorola Mobility, in its first trading update as an independent company, reported an operating loss of $89m (£54.9m).

McManus says she is “hopeful” the division can turn around this loss by the end of the year as the brand evolves its new positioning and the Xoom and Atrix become available on more networks beyond Orange.