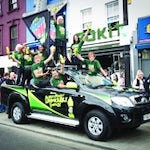 Teams of iD Staffing brand ambassadors, collectively known as the ’Mountain Dew Energy Crew’ will be distributing bottles of the energy drink at popular locations for the target audience in major cities and targeted events nationwide.

The aim of the campaign is to drive maximum trial and awareness of the brand. An estimated 300,000 samples of Mountain Dew Energy will be given out during the campaign.

Britvic introduced a citrus variant of Mountain Dew in April. The drink has been reformulated from the US version, where it is not positioned as an energy drink.

Cities to be visited include Milton Keynes, London, Edinburgh, Brighton, Chelmsford and Newquay.