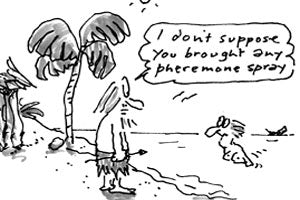 It is an axiom as old as marketing itself that sex sells. Quite why someone totally lacking in allure should feel the purchase of, say, a particular brand of coffee should confer an animal magnetism that was hitherto lacking is beyond reason. Perhaps it owes something to desperation. But it bears further investigation, and for enlightenment marketing must turn to science.

Fortunately science is only too eager to oblige. In seats of higher learning throughout Western Europe and the US, teams of researchers are constantly unearthing the secrets of sex appeal. Some of their findings may have no obvious application to marketing but all should be noted just in case they might be turned to commercial advantage. Here, then, are some of the most significant keys to unravelling the eternal mystery.

First comes odourless smells: a paradox but true. Scientists at the University of Vienna discovered that female chemical messengers known as pheromones may help to dupe men into thinking plain women are attractive and beautiful women are less attractive. It’s all down to chemically induced perception (and deception). The scientists exposed 66 men to synthetic vaginal pheromones without their knowledge (don’t ask me how) and then showed them photographs of women who they were asked to grade in terms of desirability. Next, the scientists replaced the pheromones with water. Result: when under the influence of pheromones the men found all the women attractive, even those who fought in the light heavyweight division. Under the influence of water the illusion vanished.

“The most astonishing thing,” said the professor in charge of the experiment, “is that the attractive women lose and what they lose the others gain. This is part of what we call the chemical warfare between the sexes.”

He thinks the pheromone system evolved over millions of years to help plain women find a mate and stop very attractive women being pestered.

Next up is what’s in a name? According to the Massachusetts Institute of Technology, sexy people have appealing vowels in their name. Men whose name has a vowel sound made in the front of the mouth, such as “a” in Matt were more attractive to women than those with a back vowel such as “aw” in Paul. And the reverse is true in women. Front vowel sounds such as Kate are more attractive to men than back vowel sounds such as Rachel.

Linguist Amy Perfors puts the findings down to size. Front vowel sounds are smaller than back ones, so perhaps women are seeking sensitive men. This bears out other studies showing men with slightly feminine characteristics have greater pulling power. However, science sometimes accords with common sense and Miss Perfors confirms that men wanting to improve their chances would waste their time changing their names to Gloria or Rita. Men with women’s names were ranked least attractive of all. I suppose the same applies in reverse for girls called Horace.

The third key to sex appeal are the eyes. Even men calling themselves Daisy stand a chance of scoring as long as they are not cross-eyed. A study at Stirling and Aberdeen universities found that averting the eyes even a fraction can make you appear less attractive.

The researchers concluded: “Mating effort is a finite resource that should be allocated judiciously, and preferences for direct gaze in opposite-sex faces would increase the likelihood of allocating mating effort to potential mates who are most likely to reciprocate.” Which translated means, look the other person in the eye and you never know, your luck might change.

Fourth in line is the big girls’ blouse. Even if you are called Bruce and have eyes that meet in the middle, don’t give up. If your face is a little on the girly side you might still be in with a chance. At Liverpool University they found men with feminine faces were appealing. “Facial types indicate how a particular person might behave in a relationship and the potential benefits they could give to offspring,” said Dr Tony Little, from the university’s School of Biological Sciences. “Those men with a feminine face tend to be associated with stability and caring.”

Finally, it’s a wiggle in the walk. Women wanting to deter unsuitable males alter the way they walk, according to researchers at Queen’s University, Ontario. They discovered that when females are ovulating they walk with fewer hip movements and with their knees closer together. Why? Because for a woman to advertise her fertile time would be to invite a large number of competing males. And in a crowded street you can see how that might disrupt the traffic.

On reflection, the more we learn about sex appeal the less we know, or as Benny Hill put it: “Those hot pants of her’s were so damned tight, I could hardly breathe.”