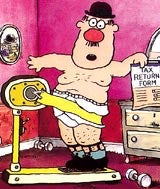 Few people would detect an immediate resemblance between the Inland Revenue’s cartoon character Hector the Tax Inspector and the much-loved Mr Men.

Most readers will know Hector as the oddball cartoon character nagging us about self-assessment forms.

But the Diary has discovered that bumbling Hector has close links to the quirky but loveable Mr Men.

We can only assume Giles’ favourite childhood characters were Mr Mean, Mr Fussy and Mr Grumpy.

MTVi, the online division of music channel MTV, is accelerating its UK Internet strategy and has announced a number of appointments as part of its “extensive” UK marketing push. Simon Downing, who joins from Electronic Arts, becomes UK marketing director. His brief is to develop a marketing team that will work with both the broadcast […]

Although we have never had it so good New Labour’s campaign has created a land fit for florists rather than a platform for responsible voting.