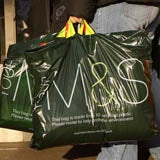 Her appointment to the newly created role marks the final senior appointment in CEO Marc Bolland’s restructure of the marketing and brand teams.

She will report to M&S group marketing director Steve Sharp.

Jones and Weston will be tasked with carrying out Bolland’s strategic aims to clarify its sub-brands and clothing labels, make more of the M&S brand and boost its presence in the homewear market.

In its full year trading update last month, the first under Bolland, M&S reported a 13% increase in profit to £714.3m. Group revenue increased 4.2% to £9.7bn.during the period.