The ads for M&S champagne appeared on the pre-teen gaming site GirlGames1.com as part of the retailer’s retargeting advertising service and were noticed by a mother of a five-year old girl using the gaming site.

The ads appeared on the site after the mother searched the M&S website to look for champagne in the run up to Christmas and triggered the alcohol ad targeting which targets users with ads from websites they have previously visited.

The mother contacted Alcohol Concern, which contacted the Advertising standards Authority and M&S.

The retailer has since removed the ads and delisted alcohol ads from retargeting services.

A spokesperson for M&S says: “”We take our advertising responsibilities very seriously and would never deliberately advertise alcohol to children. As soon as we were made aware of this mistake we immediately removed all alcoholic products from our re-targeted advertising including this particular website. We are also taking measures to ensure that no re-targeted adverts appear on children’s websites in the future. We would like to thank Alcohol Concern for highlighting the issue on this website to us.”

The ASA says: “The ASA takes the issue of ads for age-restricted products being seen by children, even inadvertently, very seriously. The strict alcohol advertising rules place a particular emphasis on protecting young people, and prohibit alcohol ads from appearing in media where more than 25% of the audience is under 18 years of age.

Alcohol Concern is warning all retailers to be wary of advertising techniques and urged the ASA to do more to protect children and investigate how alcohol advertising rules are being broken online.

Don Shenker, Alcohol concern chief executive, says: “We were shocked that this little-known advertising method can result in companies, often unknowingly, advertising alcohol straight to children. Parents should be able to browse and buy alcohol online without worry that their children will be targeted later on.” 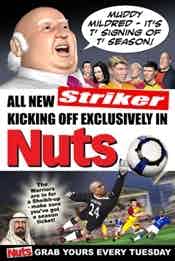 IPC Media is repositioning its weekly men’s magazine Nuts with a  £500,000 marketing campaign.