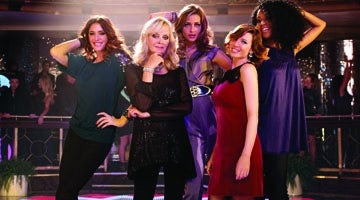 It is the first festive campaign from M&S since it overhauled its marketing strategy in March and M&S marketing director Steve Sharp claims it is the retailer’s “best ever”.

Sharp says: “This is the most integrated campaign we’ve ever put together. There’s a seamless transition from TV to online and we have a strong presence across all media, from mainstream TV right through to social media.”

The M&S clothing ad features Peter Kay leading the celebrities in a choreographed dance backed by the Bee Gees track “You Should Be Dancing”.

The ad features the celebrities in a range of M&S party wear, lingerie, sleepwear and formal dinner suits.

Caroline Quentin stars as the “hostess with the mostest” in two Christmas themed food ads. One, breaking in late November, shows a dinner party scene, the other, which breaks in mid-December, shows a Christmas Day scene.

The TV campaign, created by RKCR/Y&R, launches on Wednesday (3 November) on ITV1.

M&S is also launching a Christmas microsite called Christmas Helper designed to give consumers advice on organising their festive celebrations.

It includes a gift finder, a Christmas party and dinner planner with advice and preparation tips and a “size detective” feature that helps shoppers anonymously email friends and family to find out the right size they need for clothes.

M&S TV, fronted by Myleene Klass, will include a lingerie buying guide and fashion and food tips for the festive season as well as behind the scenes footage of the Christmas ad campaigns.