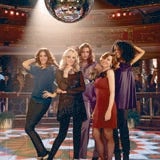 M&S says total UK sales increased 4% while like-for-like sales rose 2.8% during the 13 weeks to 1 January, driven, it says, by innovative products and promotions.

General merchandise sales, including clothing and home, increased 3.8%, while its food business reported a 1.8% rise in sales during the period.

The retail chain estimates that the snow and ice, which affected footfall and online shopping in the run up to Christmas, had a 1% impact on food sales and a 3% impact on general merchandise.

In food, M&S says “bigger and more impactful promotions” including Deals of the Week and half price champagne, bolstered sales and helped deliver its biggest ever day of food sales reaching £50m on 23 December.

During the period, M&S introduced 600 new products in line with the strategy Bolland introduced in November to help differentiate M&S from the competition.

M&S Direct sales were up 25% in the quarter, a year on from the launch of its multi-channel proposition “Shop Your Way”.

Sales at international stores increased 4.5%, which the chain says reflects a good performance across most markets.

Bolland remains cautious about the outlook and expects trading to be “more challenging” as public spending cuts and increased VAT put further pressure on disposable income. He adds, however, that M&S is “well positioned to meet the changing needs of our customers”.

“We delivered a great Christmas for our customers, from our stylish occasion wear to our innovative festive food”

Sir Stuart Rose, former CEO of M&S stepped down as chairman on 4 January, making way for Robert Swannell to take over the role.