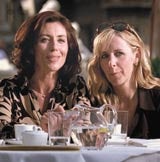 Marks &amp; Spencer Money is putting £20m behind the launch of its new “&more” combined credit and loyalty card, to coincide with a new integrated role for financial services within M&S.

The centre-piece of the campaign will be a one-month TV campaign, created by Rainey Kelley Campbell Roalfe/Y&R, which breaks during this Sunday’s episode of Coronation Street. The ads feature people using the &more card in a variety of situations, highlighting the loyalty scheme, which rewards any card purchases with M&S vouchers. The soundtrack – Dean Martin crooning That’s Amore – links to the name of the card.

M&S’s ten largest stores will also have “singing windows” promoting the new card. There will be an interactive window at the flagship Marble Arch store.

M&S Money sales and marketing director Alistair Milne says M&S is to extend the amount of financial services centres in its retail outlets. He is looking at packaging financial products in a similar way to fellow retailers Boots and Sainsbury’s, which offer “off the shelf” insurance in a box. Milne is also considering launching a Sandler “safe-haven” savings product, designed by the Government. Most of the financial services industry has turned its back on the products. M&S rebranded M&S Financial Services as M&S Money last month. It expects 2.3 million existing customers and 300,000 new consumers to take up the &more card.