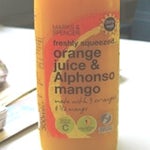 Shoppers who buy a bottle of M&S brand orange juice are directed to scan a QR code with their phone’s camera which directs them to a Food To Go mobile site featuring a range of content and a voucher code to claim against the next bottle of juice.

The retailer’s Food To Go campaign follows its first push into mobile marketing with its Back To School campaign last August.

M&S is one of the first UK retailers to adopt the technology to interact with customers. The QR format has been popular in Japan, resulting in a number of high-profile attempts to repeat its success here.

Last year The Sun attempted to educate millions of its readers about the format to drive traffic to its mobile site via an eight-page pull-out section in the newspaper.

This was followed by campaigns from brands including the BBC, Fanta, Ford, Pepsi, Volvo and Yell. But development of the format has been hobbled by the lack of QR code readers embedded in UK phones.

An M&S spokeswoman said the retailer was looking to engage more with its customers. “We’re trialling QR codes as an innovative new way to communicate with our customers,” she said. “At this stage it’s only on our Food To Go freshly squeezed juices.”