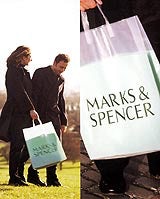 The new look, which follows the appointment of Interbrand Newell and Sorrell to analyse the company’s branding last year, is more modern and uses a new range of green colours to be introduced throughout the company’s operations.

The redesign, which also involves the introduction of the M&S name on all own-label ranges in place of the famous St Michael brand, follows a top-to-bottom review of M&S’ business after a halving of profits last year.

M&S appointed a new chief executive, Peter Salsbury, and a new chairman, Luc Vandevelde, in the wake of the review, which has led to massive job losses at senior levels. Marketing supremo James Benfield was replaced by Alan McWalter, formerly Woolworths’ marketing director.

McWalter is overseeing a creative and media agency review of the company’s expanded £15m advertising account. BBH, BMP DDB, Ogilvy &amp; Mather and Rainey Kelly Campbell Roalfe/Y&R have been shortlisted for the creative business. A media appointment is expected at the end of April, following the result of the creative pitch.