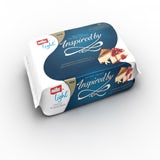 Müller says it is launching the new variants following the success of its Limited Edition Lemon Cheesecake yogurt, which was launched last autumn. The flavour will now be replaced by a Summer Berries option.

The two debut lines in the Müllerlight ‘Inspired by……’ range are Strawberry Cheesecake and New York Style Cheesecake yogurts.

A £1.5m media campaign, formed by part of the £7 million marketing spend behind the Müllerlight brand this year, will support the ‘Inspired By……’ launch.  It includes the creation of a bespoke 30-second TV ad for the new lines and a new consumer press execution to run in women’s magazines and slimming titles.  Both the TV and press ads will go live in the autumn.

Müller Dairy’s interim marketing director, Jonathan Dee, says:  “Consumer research shows that ‘sweet break’ is the biggest snacking occasion opportunity.  It accounts for almost a fifth of all snacking occasions, and there’s a lot more that yogurt manufacturers could be doing to tap into this opportunity to encourage consumers to reach for a yogurt  rather than biscuits, cake or a chocolate bar.

“Consumers want to indulge without feeling guilty and that’s exactly where the ‘Inspired By……’ range fits the bill.”