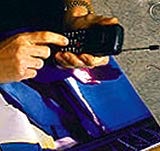 Contextual marketing is one of those terms that makes you groan when you hear it. Oh no: another bit of jargon designed to persuade you that your current marketing efforts are inadequate.

But while the mention of the term elicits as many definitions as there are people prepared to have a go at defining it, the basic premise is clear. Your chances of a successful interaction will be improved no end by sending a message to people when they are in a mood to hear it and using the medium that the prospect is most comfortable with.

Direct marketing agencies have grown highly skilled in designing beautifully crafted mailers that are sent out quarterly to a database of existing or prospective customers to encourage them to do business with you. They have even gone further to identify, say, when a customer’s car insurance is up for renewal so they can send a targeted mailer at the right time.

But this is only half the story. Getting the message and timing right is one thing: sending it in the right way is another and involves the added dimension of using the different communication channels to reach people when they are in the right place or the right frame of mind to buy.

New technology is creating these chances to approach people in different buying environments: WAP, SMS, PDAs (personal digital assistant), interactive television and e-mail. Yet, so far, many direct marketing agencies are failing to capitalise on them. This is partly because they are fearful or unsure how best to use the new media or how to integrate them with existing procedures.

WAP phones are unlikely to become a roaring success until the next generation – 3G technology – comes along, speeding up the process of hooking up to the mobile Internet; but text messaging has already engulfed the consumer market in a very short time. Young people are sending millions of SMS messages every day, but the commercial world has been slow to take up the gauntlet. Yet, SMS messaging has obvious applications that could revolutionise marketing to people in context. The most obvious example is localised targeting, which means that as consumers walk down the high street they could be sent a message telling them that the DIY store a few metres away is discounting electrical tools, or that their local bar is running a two-for-one happy hour.

With a WAP phone, this could be taken even further, says Laurence Grinter, creative director, new media, at DM company TDA. “A promotion at a new bar could be mailed to people on their WAP phone and this could include a barcode entitling them to a free drink, which would be scanned by the bartender.”

Understandably, some marketers are wary of this medium. The novelty could wear off fast, says Ben Stephens, managing director of Rapier.

“The worst-case scenario is this,” he says. “Say McDonald’s uses WAP to alert all potential customers within a 100-meter radius of its outlets to a special offer. Imagine the target of such a campaign was wandering along Oxford Street – their phone would be beeping every few minutes. Not only could this be annoying, it could be taken as an insult to their intelligence. If we are not careful WAP and SMS could be tarred by the ‘junk’ label DM has been striving to rid itself of for years. It is important to ensure that any messages sent are relevant.”

Permission is an important issue here. To avoid the “junk” label, SMS is best used when a select group of consumers have opted to receive messages from a particular sender. Those recipients will even agree to pay the cost of the messages if the content is valuable enough to them. Thus, SMS could be used by share-dealing companies to alert customers instantly to a rise or fall in a stock price, or by theatres to tell people that they have ticket returns for tonight’s performance, or by estate agents to inform buyers that a new property fitting their requirements has come on to the market.

A company called On Board Info has created software that sends personalised marketing messages to customers’ electronic diaries, whether based on a PC, mobile phone or handheld PDA. For example, a football club could place its fixture list in a fan’s diary then let him or her know when tickets go on sale. A travel company could send special offers to a customer who requested a holiday in Spain in June. On Board’s technology is already being used by ZDNet UK and Sportinglife.com, for example.

Aside from targeting people on the move, new technologies are also offering novel ways of approaching people precisely when they are ready and willing to buy. Interactive television is still in its infancy but this will offer consumers instantaneous ways of seeing then buying a product, much as the Internet already does. Grinter of TDA predicts that once iTV takes off, it will be even more successful than the Internet since research suggests that consumers will be happier to buy using the medium.

In the meantime, shopping over the Internet continues to grow, making e-mail an attractive medium for alerting potential customers to what is on offer.

“Driving business by e-mail is cost-effective, dynamic, traceable and instantaneous,” says Guy Marson, chief executive of e-mail marketing company Mailtrack. He suggests that consumers who prefer the medium to traditional direct mail range from those who want to save trees to those who simply enjoy online interaction.

Firing off an e-mail to all the names on a database is substantially cheaper than the cost of designing a leaflet, printing it, stuffing the envelopes and paying the postage. E-mail is also very simple to customise for different market segments (though traditional mail has also been helped in this area by developments in digital printing). A DIY chain, say, may have 1,000 products on special offer. If it has done its homework, it will also know which of its customers have a garden and may be interested in the cut-price lawn mower and which others are in the process of doing up their bathroom and would like to hear about taps and tiles. Rather than inundating the whole database with the entire product list, it would be more effective to send a few highly targeted offers to each customer.

Marson adds that online data capture offers huge advantages over traditional coupon-based approaches: “It’s cheap, quick, efficient and clean. The consumer does the data entry, so there is no fulfilment house and no danger of third-party typing errors.”

With so much new technology available which can improve the direct marketer’s lot, why is it that some of these approaches have been so slow to take off?

Part of the reason is the inadequacy of existing databases and the fact that marketers have been slow to gather useful information about prospects that could enable them to target customers more effectively.

It is surprisingly recent, for example, that companies started asking customers for their e-mail address, says Ed Butcher, managing director of new media DM specialists Red Square Fusion. “We’ve recently started looking after a database of more than 2 million names, which had previously been targeted with good old-fashioned, paper-based DM. We know that 60 per cent of the people we want to contact have e-mail but we don’t have their addresses. As new data is gathered we have to make sure we have all the information we need.”

And this information goes further than simply gathering addresses, adds Mark Kelly, database director at Colleagues Direct Marketing. “People are getting better at asking the right questions. Can we contact you?, for example. How can we contact you? Would you prefer post/e-mail/phone contact? How often can we contact you? What would you like to hear about from us?”

Entire Company managing director Ian Stockley suggests that part of the reason that databases have not been kept up to date with useful information is that the marketing and the customer services databases have often been kept by two different departments in the past, but these are now coming together.

He adds that the best means of communication will depend on individual preferences and on the product offer. For example, general insurance could be sold over the phone while life insurance probably needs a face-to-face meeting. “If someone has chosen to communicate with us over the phone or by e-mail, then next time we will approach them through their chosen channel.”

The Entire Company’s clients include the Reader’s Digest, a huge user of traditional direct mail that is now starting to explore outbound telemarketing and electronic media, firstly by analysing how amenable customers are to different approaches.

Another factor that is hampering the integration of new media with traditional lifestyle direct marketing is the demarcation between agencies. “Clients will sometimes retain both a Web agency and a DM agency, so the electronic budget goes to the Web agency,” says Grinter at TDA. “But some agencies, too, have been slow to realise how akin to DM new media messaging is,” he admits.

With turf wars being waged both between agencies and between client departments, there is a lot of work to be done to smooth the integration of old and new media. The technology to approach customers in different buying contexts certainly exists, but many factors still stand in the way of its acceptance into client armouries.