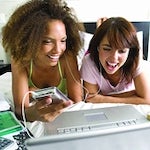 Simultaneous use of different kinds of media means that Britons are able to cram almost 9 hours of media into just seven hours of the average day, the broadcast regulator’s “Communications Market Report” finds.

Media multi-tasking now accounts for one fifth (20%) of all media consumed throughout the day, the report claims.

This increased juggling of media types is being driven by the young, with almost a third (29%) of 16-24 year-olds multi-tasking, compared to just 12% of people aged 55+.

“Younger people have shown the biggest changes in how we use media – particularly using different media at the same time.

“Consumers are using communications services more – phone calls, texting and the internet. Yet they are paying less despite getting more, partly through buying in bundles,” he says.

Despite the increased use of digital and mobile devices, traditional media such as television “still remains the main entertainment event of the day”, Phillips says.
The report finds that TV remains the activity that most adults would miss the most

Ofcom based its findings on industry sources and a survey of 1,138 adults.