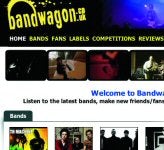 Online music community network Bandwagon.co.uk is looking to take on the might of MySpace, and raise revenues for bands by aping the concept of Alex Tew’s Million Dollar Homepage.

Bandwagon is to launch the Million Pound Jukebox later this week, and claims to be the first advertising-funded model where ad revenues go directly to bands featured on such a site.

The Million Pound Jukebox will offer brands the opportunity to support new music talent in the UK and Ireland by buying ad space on the homepage – at £1 a pixel. Bandwagon says 70% of net revenue will go to bands featured on the site.

Working from the same model as Tew, the jukebox aims to raise £1m in ad revenue. A spokeswoman says it is “a fantastic opportunity for brands that want to be associated with new music and youth. However there is a big difference with this model – at the end of the 12-week period the money raised through the advertising will be split among 20 winning bands.”

The Million Pound Jukebox launches on Friday (February 2) and over the course of 12 weeks will feature a selection of new artists from leading record labels as well as unsigned talent.

The music is available for sharing but the spokeswoman adds: “One massive advantage Bandwagon has is that people can download a single from their site and it will be chart eligible.”

WPP Group has taken a stake in US advertising and mobile search company JumpTap, as it looks to bolster its position in digital media. The purchase by WPP Digital, for an undisclosed sum, follows other recent investments in the digital field…

The straight-talking head of Interpublic’s newly merged ‘smart’ integrated offering is a larger-than-life character, one who believes that accountability and cost efficiencies are as important as creativity – as we reveal in this exclusive interview with Marketing Week. By Catherine Turner.