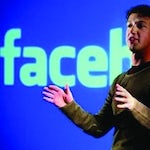 Musicians and celebrities on MySpace can also use the integration to share content, such as albums or photos, on their Facebook stream. Those who have liked an artist’s Facebook page can then be kept up to date with their content and information from MySpace.

The tie up comes almost a year after MySpace launched the same functionality for Twitter users.

Jennifer Ruffner, director of product for stream at MySpace, said, “This new sync functionality is part of an ongoing effort to make it simple for people to share their updates beyond MySpace and allow fans and friends to interact with that content across the web.”

MySpace is planning a full relaunch of the site later this year. In July it relaunched its profile pages to focus on a user’s news feed, similar to Facebook.