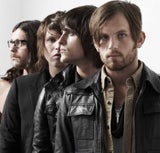 The partnership will enable users to listen to full-length songs, watch pop-up videos and get tour information on bands through Google.

Fans will also be directed to iTunes and Amazon, where they can buy tracks from artists such as Kings of Leon (pictured).

Myspace says the new venture will make it easier for music lovers to find, listen to and buy music.

This is the first time concert details and music content will be integrated into a Google search.

The music will be provided by major labels EMI, Sony BMG, Universal, Warner and Sony ATV, as well as independents such as the Orchard and IODA. The labels are also making their fully licensed video catalogues available.

The partnership has been developed by iLike, which was acquired by Myspace in August.

Myspace president Courtney Holt says, “We’re delighted to have implemented this and it is only the beginning of our efforts to innovate in the live event space.”