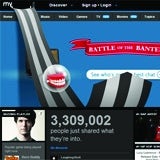 Over 500 employees are likely to be made redundant as NewsCorp pares down the revenue-losing site.

In November News Corp president Chase Carey hinted that a sale of MySpace was possible, saying the site continued to be “problem” for the group. NewsCorp bought MySpace in 2005 for $580m.

The site relaunched in October last year in an attempt to reposition as a social music platform but has failed to deliver a significant boost in traffic numbers, usurped by more popular social networking sites such as Twitter, Bebo and Facebook.

In November MySpace partnered with Facebook to create Mashup, which allows its users to login to their Facebook accounts using their MySpace page.

In stark contrast, Facebook continues to grow, with revenue for the first nine months in 2010 reaching $1.2bn (£776.4m). The social network is also reportedly increasing its staff.