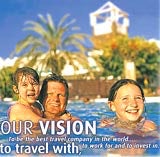 The company will transfer two planes from its charter operation to a low-cost airline, which will launch in October. The airline will be separately branded and fly from an as-yet unnamed major UK airport.

Richard Carrick, recently appointed chief executive of MyTravel’s new development division, says that he will be appointing a regional agency “which understands and knows the local catchment area”. The company is working with Corpbrand of Twickenham on the airline’s brand identity.

Carrick adds: “The challenge is to use the value of the MyTravel name on the one hand but also to have our own recognisable identity as a low-fares airline.”

MyTravel is also expected to review its retail advertising agency arrangements for next year. Clear Marketing, which handled the £6m work for the Going Places retail brand, has a contract which ends in July.

The Going Places name is being phased out, to be replaced by MyTravel. Duckworth Finn Grubb Waters has been hired to work on the introduction of the MyTravel brand but it is unclear whether the agency will remain on the account in the long term. Marketing director Tim Marsden declined to comment on the matter.