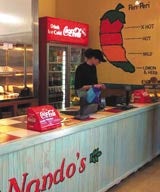 Restaurant chain NandÃÂ²s is searching for an agency to handle its advertising.

The brief is to create a radio campaign for the World Cup, which if successful will be expanded to other forms of above-the-line advertising such as television or press. NandÃÂ²s marketing manager Louise Agram is heading the search.

The move has been triggered by an increased presence in the UK by the South African company. Since the opening of the first UK NandÃÂ²s in 1992, the chain has increased to 50 outlets, 35 of which are in London. NandÃÂ²s plans to open another 20 restaurants this year, followed by a further 20 in 2003.

In the past, NandÃÂ²s has used Fallon and Rocket to handle its advertising and media.

The company was formed in 1987 by founders Fernando Duarte and Robert Brozin and its first outlet opened in Rosettenville, a Johannesburg suburb. It has 400 restaurants spanning four continents, with 180 in South Africa.

NandÃÂ²s employs 4,000 people worldwide and plans to open four outlets in the US by 2004. NandÃÂ²s has also launched its sauces into the grocery market.