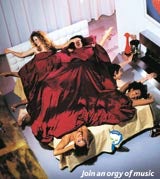 A Napster poster ad depicting five people frolicking on a bed has been banned by London Underground over concerns that it would offend commuters.

Meanwhile, the Advertising Standards Authority has received a complaint regarding a different execution in the campaign because it uses a phrase adapted from the Lord’s Prayer. The ad shows the back of a topless woman in a changing cubicle with the phrase “Forever and ever and ever, Amen”. The ASA ruled that it would not cause serious offence.