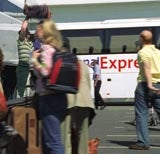 National Express Coaches is set to advertise on television for the first time and will launch a new brand strapline in the face of renewed competition from low-cost operators.

The strapline is “Everyone, everywhere, everyday”, and the ads will depict the variety of customers that use the operator. The advertising has been created by Inferno and will break in the Carlton, Granada and Yorkshire regions on July 5.

The Piper Agency is handling media planning and buying and the ads are expected to roll out to other TV regions by Christmas.

National Express is coming under pressure from rival operators such as Stagecoach, whose MegaBus brand – which offers fares from £1 – has been launched with the backing of a London Underground and rail poster campaign.

EasyGroup’s easyBus venture is also gearing up for launch. The company’s first bus arrives from Mercedes in Germany this week and, after being painted in easyGroup colours, will take to the road in August.

The company began in 1969 as the state-owned National Bus Company. It was privatised in 1988 and floated in 1992. The largest shareholder is Standard Life, with 7.02 per cent, and other shareholders include Barclays Global and Legal &amp; General.

National Express also operates rail networks and recently lost the ScotRail franchise to First Group. However, earlier this year it won the Greater Anglia franchise, now rebranded as One.

The company appointed David Ross chairman in May this year to take over from Michael Davis, who has retired.