As part of the refresh, the iconic National Lottery “crossed fingers” logo, which is recognised by 95% of adults in the UK according to the company, will be placed on every game, while online Instant Win and Scratchcard games will be placed under the umbrella brand “GameStore” across digital and retail.

Sally Cowdry, marketing and consumer director for Camelot, told Marketing Week that while the cross fingers logo is well known, it doesn’t have prominence in some of the company’s other games, something it plans to change by putting it “front and centre”.

The new identity is the next stage of the company’s “Life Changing” strategy, which, along with the launch of the brand’s “Play Makes It Possible” campaign last summer, has helped Camelot deliver what is says will be a “record year” of sales and funds raised for its “Good Causes” charitable projects throughout the UK.

“Ultimately all of our marketing and focus is to raise as much money as possible for National Lottery Good Causes, and we are just about to close what I think will be a record period and year for us,” Cowdry says.

In its latest company results to the end of September 2014, Camelot reported sales of £3.5m, up £158m year on year and the second-highest total since its launch in 1994.

However, Cowdry says the company still has strides to make in gaining awareness of how its entire portfolio of games, which includes EuroMillions and Instants along with Lotto, plays a role in raising money for Good Causes.

“Camelot runs four of the biggest brands in the UK,” she says. “While a lot of people know Lotto is party of The National Lottery, many people don’t know [other games like] EuroMillions are part of it and play a role in raising money for National Lottery-funded projects.

“What we’ve been doing over the last year is looking at how we can bring that story to life through both traditional and content marketing around the stories of winners and the projects we support.”

Awareness of how all of The National Lottery’s games contribute is crucial for the brand, as its own tracking research shows that the more people hear about Good Causes, the more likely they are to play.

“We find it’s even more true among under 35s, who have evolved and grown up over the economic crisis and are more focused on interacting with brands that do good,” she adds.

The National Lottery claims it delivers over £33m each week to Good Causes in the UK and has given away over £54bn in prizes and created more than 3,800 millionaires or multi-millionaires since its launch in 1994.

The campaign and identity are part of the overarching “Life Changing” strategy and company purpose which the brand introduced 18 months ago to bring together the connection between winning and National Lottery-funded initiatives.

“Any great brand needs to innovate and stay engaging, especially today with the bombardment consumers have from other companies,” Cowdry says. 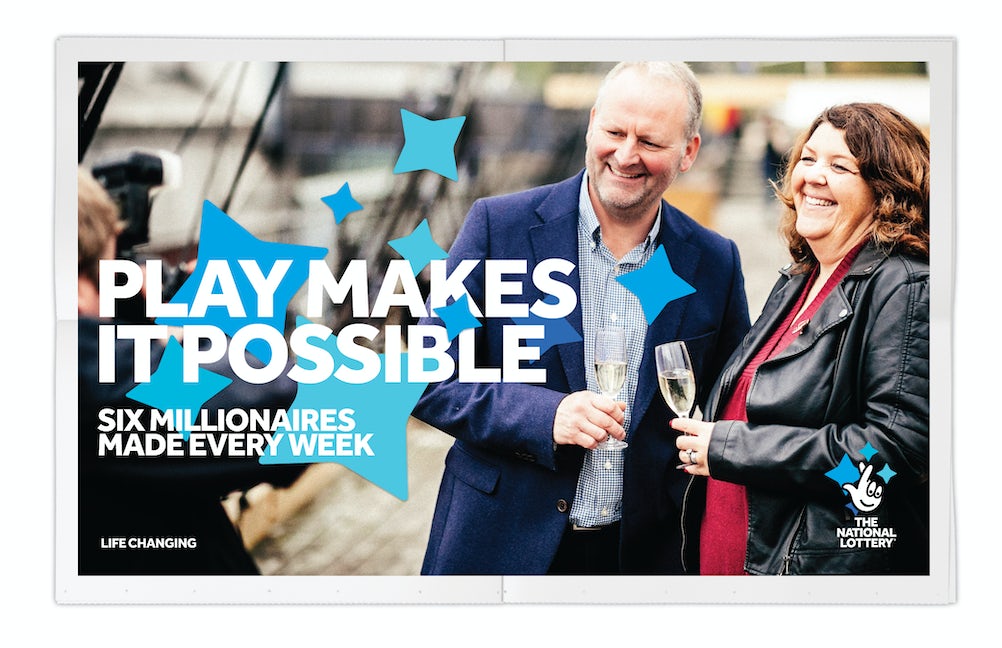 Camelot has credited the part its marketing campaign for the relaunched Lotto played in returning its flagship brand back to growth last year despite the controversial decision to double ticket prices in the Autumn.