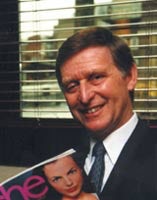 National Magazine Company’s managing director Terry Mansfield must have had a wry smile on his face as he snatched Gruner &amp; Jahr from under the noses of IPC Media in a deal that was negotiated over the weekend.

The company says the purchase strengthens its core markets in women’s interest, home and parenting titles and the male market. It also makes the point that content from G&J’s titles will be used to enhance its recently launched uk.women.com and that the magazines will potentially provide a larger online community.

Mansfield says: “The Hearst Corporation is a bigger business than people realise. We are always in a position to write a cheque.”

He refused to say how much the deal – to be completed on or before August 31 – cost, but indicated that it was over £30m.

There could well be further acquisitions for the company that is now number three in the market behind IPC and EMAP.

But New PHD press director Laura James says: “It’s an interesting acquisition and the fit doesn’t appear to be a natural one with their portfolio. One could suppose that they have bought the titles to sell off the weekly element and Focus.

“The purchase will expand the company’s role in the middle-aged domestic market, by adding Prima to Good Housekeeping.”

But Mansfield says: “We don’t buy magazines to fold them and we aren’t a banker. We are a magazine and media company.

“I’m excited about going into the weekly business for the first time. It’s also the first time for the Hearst Corporation, which hasn’t been in the weekly magazine business before. “With Prima and Good Housekeeping, we have the Daily Mail and Daily Express of magazines.”

He says it is too early to say what plans NatMags has for G&J’s Vital, due to be launched in the autumn, but indicates that the company already has women’s monthly She, which appeals to the same age range.

“It would be unfair to comment on IPC. They are competitors in the magazine business, not enemies. If they want to sell me Country Life and Women’s Journal, I would be happy.”

MediaVest client services director Nigel Conway says: “It’s an incredibly cheap way for NatMags to expand its portfolio. It hasn’t succeeded in growing titles and this gives it a serious foothold in the market.”

G&J led the German invasion which created mayhem in the UK women’s magazine market during the mid-Eighties.

Its first UK title, Prima, was launched to widespread indifference in 1986.

Rivals sneered that its homely, down-to-earth approach would never catch on in a style-obsessed sector, but it quickly became the biggest-selling women’s monthly.

It was followed by the weekly Best and H Bauer’s Bella, which immediately made massive inroads into the circulation of IPC’s Woman and Women’s Own, the traditional market leaders.

The German titles’ bright, unpretentious mix of gossip and practical tips made the IPC stable look dated and stuffy – the sort of magazine your mother would read.

For a while it seemed as if G&J and Bauer had the magic formula in an overcrowded and fiercely competitive market.

Compared with UK publishers, the Germans could afford to look long term, because they didn’t have the City breathing down their necks. If they believed in a project, they had the cash and the confidence to stick with it.

But G&J’s formula lost its shine as IPC revamped its titles and poured millions into marketing.

To make matters worse, the company became embroiled in a costly price-cutting war with IPC, following G&J’s 1996 launch of celebrity gossip title Here! which was later merged with IPC’s Now.

New PHD press director Laura James says: “G&J did shake up the market with high circulation mainstream titles, but the problem was that they were easily copied.”

The rise and fall of Gruner &amp; Jahr UK