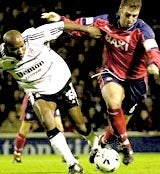 The Football League has revealed its biggest title rights deal to date after announcing that Nationwide will continue as its sponsor in a &£12m, three-year deal until the end of the 2003/4 season.

The building society has sponsored the league since the start of the 1996 season when it signed a three-year deal worth &£5.25m.

Football League chief executive David Burns says: “This has already been one of the most successful sponsorship arrangements in modern sport.

The deal includes a &£750,000 “Season of Promise Initiative” which gives each football club &£10,000 to help disadvantaged groups.

More than 14 million people attend Nationwide Football League games each year. The league has 72 football clubs located in 67 towns and cities across England and Wales.

Nationwide is also a sponsor of the England Football team until 2002. An announcement about its sponsorship of the non-league Football Conference is expected within days.