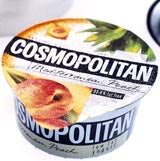 Cosmo Yogurts, a range of dairy products launched by women’s glossy Cosmopolitan in 1999, has been scrapped by publisher National Magazine Company.

It is believed that the yogurts were pulled off the shelves because of falling sales.

The yogurts, which were rolled out as a joint venture with MD Foods, included a range of lowfat yogurts, fromage frais and soft cheeses. The products were intended to extend the Cosmopolitan brand into the health food sector, and were aimed at women aged between 15 and 44.

The women’s glossy magazine has also extended its brand into clothing, linen, watches and eyewear.

Last week, the publishing company announced the launch of a series of branded “lifestyle centres”, the first of which will open in Manchester in August. The centres will offer young women advice on exercise, nutrition and emotional problems. This follows last year’s announcement that Cosmopolitan would be launching a branded café chain.

NatMags has often been adept at exploiting the potential of its magazine brands, which include She, Company, Good Housekeeping and Harpers &amp; Queen. Good Housekeeping, for instance, has its own range of branded baking equipment and recipe books.

The deal between McDonald’s and Pret a Manger (MW February 8) makes perfect sense. Fundamentally, both are businesses built on tightly managed service systems, with relatively low customer-facing human input. They are businesses that take a relatively cheap raw material – bread – and add value to it. Even the environments that the two brands […]

Hoteliers were slow to realise the potential of professional marketers in promoting their business, but now they have woken up to the necessity of establishing brand awareness.