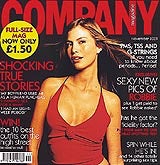 The National Magazine Company (NatMags) has teamed up with Northern &amp; Shell to give OK! away free with the January issue of its Company title, in an effort to support its sagging circulation.

The 88-page special edition of OK! will be poly-bagged with Company magazine and will appear on shelves on December 3. The two magazines will be priced at &£1.50.

A spokeswoman for NatMags says: “Company readers love celebs and gossip. Also OK! will capture a younger market, as Company readers are younger than the OK! readers.”

According to NatMags deputy managing director Duncan Edwards, the move in October to slash the price of Company was made to protect the “position” of the title and to match the price of Condé Nast’s Glamour (MW October 4).

Jazz FM-owned record label Hed Kandi is to launch a branded clothing range next year. The label, which specialises in new and classic dance music, believes a clothes brand has worldwide potential because of the music’s popularity. The range would initially be sold in specialist clothing shops but could eventually appear in high street retailers. […]

Congratulations to Osborne PR. After ten years it has managed to lure back one of its most prestigious clients – traffic cone manufacturer Europalite. This is a bit of a coup for the company, which now believes it will be “making headline news” as it did in its golden years. I’m sure we all have […]

With European advertising bodies pulling in different directions, what is needed is a clear industry voice. The appointment of Eaca President Bernd Michael may provide this.