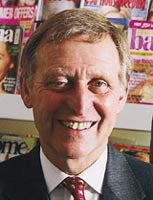 The National Magazine Company has bought the UK arm of German publisher Gruner &amp; Jahr (G&J) in a surprise move that launches holding company The Hearst Corporation into the women’s weekly magazine market for the first time.

NatMags is understood to have paid more than &£30m for the company in a deal which will be completed on or before August 31. CoMag, NatMags’ distribution arm, will immediately take over the titles’ distribution.

The future of G&J magazine Vital, which was to launch in the autumn, now hangs in the balance. As Marketing Week went to press, no decision had been made on whether the publication, which is aimed at over-30s women – also the core readership of NatMags’ She magazine – will go ahead.

Industry insiders were surprised by NatMags’ move and speculate that some of the magazines could be sold off as they are not a natural fit with its titles, which include Cosmopolitan, Harpers &amp; Queen, Esquire and Good Housekeeping.

But managing director Terry Mansfield made it clear that he will not be selling any of the magazines, and that they will add to the content and reach of its women’s portal uk.women.com. He says: “With Prima and Good Housekeeping, we have the Daily Mail and Daily Express of the magazine business.”