As part of the 2015-16 season’s “NBA Global Games” the Orlando Magic and Toronto Raptors will face off at the O2 in London in January 2016, the sixth time the city has hosted a regular season game.

The series is part of an effort to drive awareness of the NBA brand in markets such as the UK where basketball has not traditionally had a major following.

Juanita Draude, director of marketing for NBA EMEA, told Marketing Week: “We have a lot of casual fans in Europe and the UK and we want to create opportunities for them to access the NBA.

“We really are a global league and we’re working hard to get the message out there.”

The brand’s three professional leagues, the NBA, the Women’s NBA and the NBA Development League, made up 450 players last season, with 101 coming from outside the US.

Draude said that more than 60% of the NBA’s international players come from Europe, allowing the brand to tell “locally relevant stories”.

“Europe has had a big influence on the NBA and our job is to build relevance and tease out compelling narratives,” she said, adding that the NBA wants to make “branded experiences, products and content” available across the region.

“With around 1,335 games broadcast per season we have an enormous amount of content, which is one of our challenges,” she said. “It can be overwhelming, particularly for an international audience, so it’s about pulling out content that is most relevant.”

The brand recently released a content series called the “Half Court Challenge” which saw 13.5 million views across its eight episodes, according to Draude.

“The episode we did with Gareth Bale got 5 million views and generated new digital and print coverage across the globe,” she added. “Each time we do this type of content we see growth on social and a spike in engagement, and fans are more likely to come back and look for more content.”

The NBA claims to be the number one professional sports league on social media with “more than 850 million likes and followers globally across all league, team and player platforms”.

Draude said that working with the likes of Bale attracts a new fan base and is something the brand plans to do more of by working with sport and celebrity influencers on social.

“If your favourite footballer is a fan of the NBA maybe there’s something in it for you too,” she said.

She added that the brand will be investing more in digital innovation this year following the success of its BT Sport Facebook Live Lounge programming last year which saw 1.8 million fans tune in to pre-game live programming for an average time of 16 minutes.

It will also ramp up its digital OOH activity, which Draude believes is a medium that “beautifully showcases how exciting our game is”.

“We’re a game made for large formats,” she said. “We’re going to be doing a lot more of that this year.”

The Premier League and the National Basketball Association are in talks about possible marketing tie-ups as the two seek further international expansion. 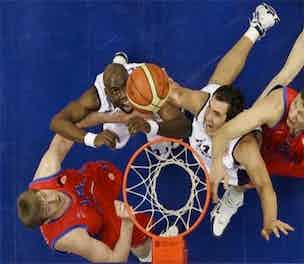 The Euroleague, the premier basketball competition in Europe, is readying a major expansion drive to the UK as it looks to raise the profile of the sport.

The National Basketball Association (NBA) is looking to increase the sport’s popularity in the UK after signing a deal with ESPN to broadcast almost 100 live games on the sports TV channel.