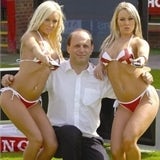 In a revelation that could set gender relations back several decades, ad agency Golley Slater claims to have discovered the real reason more women than ever have been following the World Cup/ sexual chemistry.

According to Golley Slater’s Nick Brown: “Our sex-pert revealed that men release lots more testosterone as they cheer on their team, and that if their team wins, people celebrate and release some tension with a passionate encounter.” This apparently explains why more women are watching the football, and why last Saturday night was so very uneventful in bedrooms across the land.

The Diary is not entirely sure how this information benefits Direct TVs, but here is a picture of the company’s managing director Nick Glynne shortly after watching a game (obviously not on Saturday), which seems to indicate the research may be right!