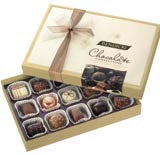 Rivals Nestlé Rowntree and Bendicks (Mayfair) are gearing up to take on the premium chocolatiers this Christmas. Both companies will launch indulgent boxed chocolates aimed at the gifting market.

The launch of Bendicks Chocolate Confections, an assortment of hand-finished white, dark and milk chocolates, coincides with the launch of a new brand positioning for the confectionery company, which also makes Mingles and its eponymous range.

The positioning will be supported by a new strapline, “It’s the Bendicks that counts”, and is designed to reinforce the company’s image as a quality chocolate maker. Bendicks’ logo has also been redesigned and will be introduced across the current range during this month. The Mingles brand will feature the logo for the first time.

The company is also launching a product called Bendicks Gorgeous, a range of individually wrapped bite-sized chocolates aimed at women who are looking for a box of chocolates to share.

Meanwhile, Nestlé is launching a range of premium chocolates, with an emphasis on the provenance of the cocoa beans and ingredients.

Nestlé Destinations is made up of miniature chocolate bars in a gift box. There are two dark choco- late variants, from Sao Thome in Brazil and Papua New Guinea; two milk chocolate bars, from Java in Indonesia and Ecuador; and a white chocolate from Madagascar.

This is not the first time Nestlé has marketed a chocolate product based on provenance. Its Double Cream range, which was launched in 2002, is made from Ecuadorian beans. It has been reduced to a niche range after poor sales (MW March 3) .